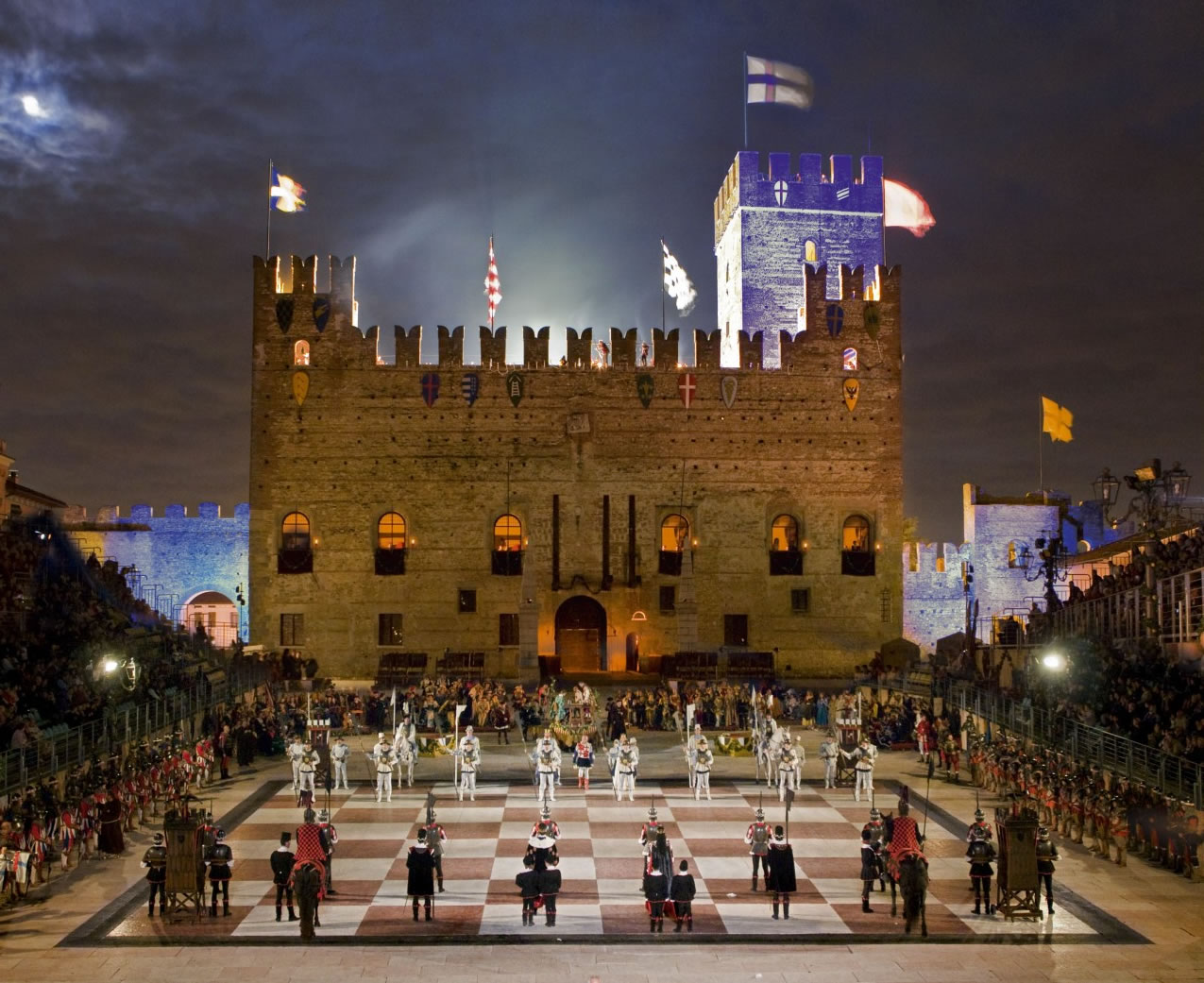 Marostica is an Italian District and Town counting approximately 14.000 citizens. Located right in front of the hills of the Asiago Plateau, it is home of an excellent climatic balance, and is world famous for the Chess Games in the City Square (Piazza degli Scacchi) and for its local delicacies, between several types of traditional cheese, ham and especially cherries;

The “Ciliegie di Marostica” (Marostica’s cherries) are actually an IGP product of Italy (Protected Geographic Area) and are renowed for their size, taste, colour, balance between acidity and sweetness, while being considered a one of a kind superfood.

The architectural and cultural history of Marostica is extensive and very wide, covering all the ages of human life on earth, with several findings of pre-historic traces of paleontologic interest.

Focusing on the recent History, since 1.400 A.C. under the Serenissima Republic of Venice, Marostica acquired great importance politically and financially; this important social achievement made it possible for several sacred architectural works of art to be built in the city, which kept staying under the control of Vicenza nevertheless. Some of these wonders of architecture can still be seen and visited today, such as the Chiesa di San Marco in Marostica, the Scoletta del Santissimo Sacramento presso Sant’Antonio Abate, the San Gottardo Church, and the Saint Sebastian Convent.

At the fall of the Serenissima in 1797, Marostica as the whole Region of Veneto were taken by France under the guide of Napoleon Bonaparte, following then the events part of Europe’s History, Marostica’s appearance have absorbed all of these different cultures between the Revolutionary French one and the Austrian one, being today the jewel we all know and see.

One of the reasons why Marostica is world famous, is the extremely characteristic and folkloristic events that take place as embedded foundation of the local culture. It’s the “Living figures Chess Game” which takes place every second weekend of September of the years composed by even numbers.  The event narrates of a fascinating story which dates 1454: “More than 600 citizens in medieval costumes, horses, armed men, flag-wavers (another typical and folkloristic figure giving a great spectacle during the event), wriggles and fire-breathers, ladies and gentlemen frame the game of chess which represents the challenge between Rinaldo d’Angarano and Vieri da Vallonara. According to the plot these young and noble offspring of the City both fell in love with the beautiful Lionora. Taddeo Parisio, Lord of Marostica’s Castle, and father of Lionora, forbade the challenge to duel as foreseen by the custom of the time, and ordered to play a game at the Noble games of Chess . He decided that the winner of the challenge would have married the beautiful Lionora, while the one who lost would marry his younger sister, Oldrada, thus becoming also a relative of his”

Aside from this extremely picturesque event, the city hosts every Sunday a different event; from the flea market to the antiques one, the spring festivities, the cherries celebration and much more. Visit the township’s website for more informations about their schedule: http://www.marosticascacchi.it/ Still today the rational and orderly porticoed square is the epicentre of political and civil, with a rectangular plan, closed to the south by the lower Castle (Castello da basso), consisting of the original keep and a crenellated fence added by Mastino Il towards the middle of 1300 A.C.

The “Castello da Basso” is a quadrilateral of about m. 40 on the side, with arcades on the courtyard, the water well and a powerful keep.

Built by Can Grande della Scala immediately after the occupation by the Scaligeri, it later became the seat of the Podestà Veneti, who were re-adapted, because originally it was only supposed to be the seat of a strong garrison.

On Marostica’s main square from the north side, overlooks the face of Palazzo del Doglione, called in ancient times Rocca di Mezzo, with its beautiful clock tower. During the thirteenth century, it had a tolling function for the goods being imported in and out of town, because of its strategic positioning. During the period of the Serenissima Republic, this majestic piece of architecture hosted the Chancellery, the archive of protocols and most importantly, the armory that housed as many as seven hundred armours that were used by the marosticensi (people from Marostica) for military exercises in Campo Marzio.

With its dovetail battlements, Marostica’s circle of walls is marked by quadrangular towers covered by barrel vaults; it extends for almost two kilometers; they measure two meters of thickness at their base, and they are as tall as 10 meters.

In addition to the large towers, there are other 20 smaller ones (called torricelle), some of which are today actual dwellings.

In ancient times the Romans built, on top of the Pausolino hill, a fortification that was later used in medieval times.

In fact, in 1262 the existence of a “tribus spondis” tower was documented on this hill and Cangrande Della Scala had the Upper Castle built on this pre-existing tower, which, having a squared shape, had four side towers and a large one in the middle. The castle was equipped, in addition to a large water well, still visible in the vaste inner courtyard, of a church and a windmill.

Today the Upper Castle of Marostica houses a restaurant and is a favorite destination for tourists from all over the world. Medical Tourism Italy’s Personal Health Planners will be glad to organize a dinner for you and your caretaker there; it is a truly incredible place.

Not very far away from Marostica was created a wonderful Zoological Park, the “Parco faunistico Cappelier”, a great destination for those who want to discover more about the local naturalistic heritage.

Suitable for all ages and levels of naturalistic knowledge, the park will show you many of the natural wonders of this area of Italy, where some of the fauna is actually at risk of extinction

Also, inside of this wonderful naturalistic park, you’ll find the Evolution’s History Museum, created to show Charles Darwin’s study of evolution, with natural scale animals and prehistoric humanoids meticulously reconstructed. You can find out more on their website here