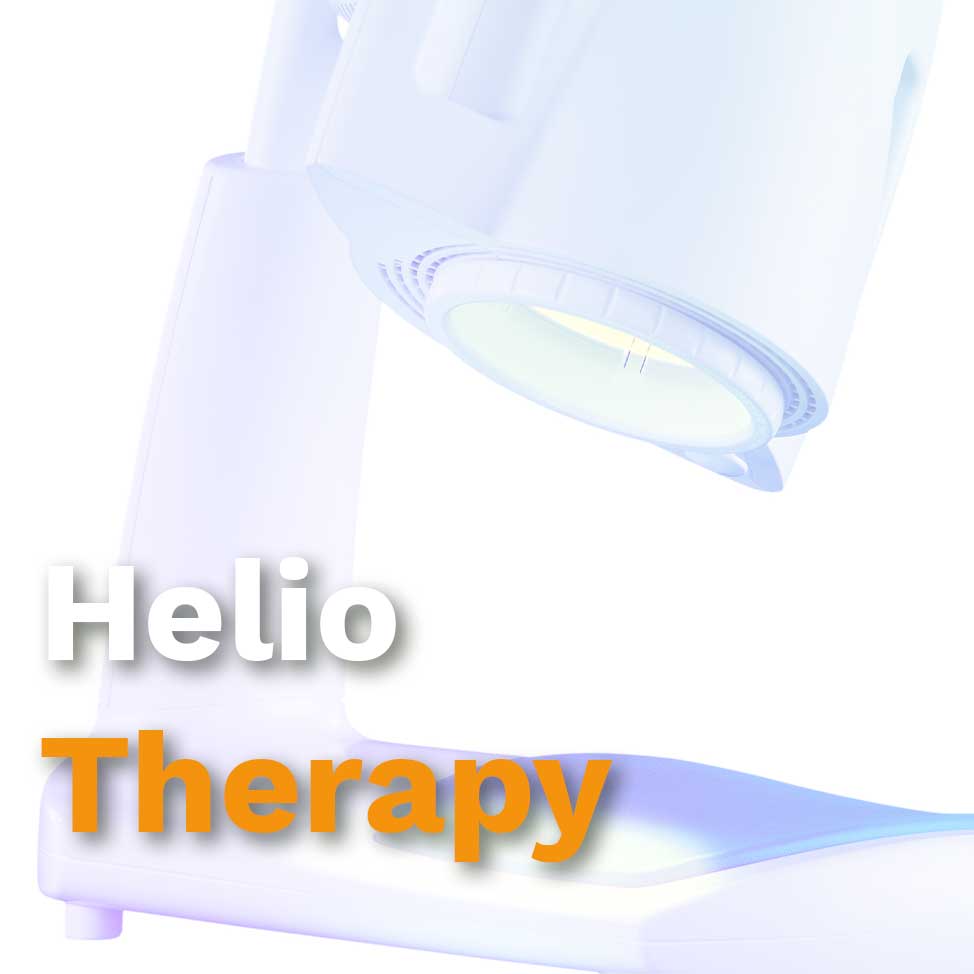 Heliotherapy is a treatment that uses exposure to sunlight or artificial wavelengths of light to cure numerous diseases and disorders. The treatment is also known as light therapy or phototherapy. Even though the term heliotherapy normally applies to treatments that use natural sunlight, the heliotherapy definition given above shows that it is also used in reference to treatments that use artificial sources of ultraviolet, visible or infrared light radiation.

The use of heliotherapy as a treatment is based on the fact that sunlight has healing properties. For several years from the late 1800s, heliotherapy was a key part of several treatment regimes because sunlight is a source of Vitamin D which is essential for fighting certain bacteria. Artificial alternatives such as ultraviolet lamps, polychromatic polarised light, lasers, light-emitting diodes, fluorescent lamps, and dichroic lamps were developed to allow flexible treatment in all seasons since sunlight is not available at all times. Some of these artificial alternatives even allow for the light rays to be concentrated onto the most affected parts of a patient’s body for increased effectiveness of the treatment.

In the late 1700s, a French doctor noticed that his patients’ leg sores healed faster when they were exposed to the sun. Nothing came of the discovery though until later. Nobel prize winner, Niels Ryberg Finsen, recorded the first scientific writings on the benefits of sun therapy after observing the effects of sunlight on his own fragile health. After experiments with animals and a series of clinical trials using natural and artificial sunlight therapy, Finsen found that smallpox, lupus and tuberculosis of the skin responded to solar radiation treatments. This discovery led to his Nobel prize win. He invented an ultraviolet lamp called the Finsen lamp, to mimic the properties of the sun. These heliotherapy lamps were used to treat a number of different diseases, regardless of the season.

Heliotherapy became more popular in the 1900s when the Swiss doctor, Auguste Rollier, opened buildings throughout Switzerland, designed to optimize exposure to the sun’s rays. These buildings were called solaria and all had south facing balconies, while some even had sliding walls of windows and retractable roofs. Rollier used heliotherapy mostly in treatment of patients with tuberculosis after he devised a detailed protocol for sunbathing for health.

Following in his footsteps, doctors across Europe began using heliotherapy as a cure for tuberculosis, lupus, cuts, scrapes, burns, arthritis, rheumatism, and nerve damage. Besides research showing that sunlight could kill the bacteria that caused tuberculosis and other diseases, there was proof that UV light could cure rickets, which is a bone disease caused by a deficiency of Vitamin D. Sunlight is rich in Vitamin D, hence its use in the treatment of rickets. The use of heliotherapy eventually died down when more doctors began to see proof that too much exposure to the sun did more harm than good.

The two main types of heliotherapy are direct sun-bath and indirect sun-bath. In the direct sun-bath treatment, lubricants such as gentle oils and petroleum jelly are applied to the patient’s body before it is exposed to the sun. On the other hand, indirect sun-bath is conducted in a room in which experts take a coloured glass and let it reflect different lights, depending on the treatment used. These lights are absorbed by the body and help to heal and cure it. The treatments help in curing insomnia, DNA repair, and boosting immunity. Sun baths can be taken by all people of all ages and both genders. Early morning and evening is the best time for a sunbath with 10 to 15 minutes of daily exposure for maintaining normal functioning of the body.

A number of techniques exist in the use of heliotherapy including the following:

This technique uses light-sensitive compounds that are exposed selectively to light. Upon exposure, they become toxic to the targeted malignant cells and other diseased cells, hence aiding in treatment.

A light box can emit up to 10,000 lux of light at a specified distance, or a lower intensity of specific wavelengths of light from the blue to the green areas of the visible spectrum. Different coloured lights are useful in different treatments.

Several cultures such as people of Ancient Greece, Ancient Egypt, and Ancient Rome used heliotherapy to cure a number of diseases. It was mostly used as a key part of treatment regimens for tuberculosis of the bones, joints, and skin. Its use for these treatments was based on the knowledge that prolonged exposure to sunlight can kill the bacteria which cause the diseases. The sunlight helped raise the levels of Vitamin D in the infected individuals, which in turn helped them fight the bacteria.

Thanks to those ancient discoveries of the healing properties of the sun, heliotherapy has evolved and improved, and has been used for the treatment of an even higher number of diseases now. This includes:

Certain skin conditions such as eczema, psoriasis, vitiligo, itchy skin, atopic dermatitis, acne vulgaris, and cutaneous T-cell lymphoma may be treated through the use of heliotherapy. UV light is used to reduce skin cell growth and inflammation in people affected by these conditions. Heliotherapy treatment of skin disorders usually offers temporary effects so numerous sessions may be required over the patient’s lifetime to maintain the results. In the treatment of skin disorders, three main types of heliotherapy are used which are:

Skin conditions such as eczema and psoriasis are treated with the full spectrum of ultraviolet-B radiation.

A small portion of UVB radiation is used to treat the skin condition when this type is employed. It is more intense than broadband UVB and is also the most commonly used type.

Psoralen ultraviolet-A (PUVA) involves combining UVA light with a chemical called psoralen which can be applied directly to the skin or taken orally. Psoralen is found in plants and makes the skin more sensitive to the light that’s to be applied. Because it’s more intense and has more side effects than the other types, PUVA is only used when treatment with the other types has been unsuccessful. It is used in the treatment of skin disorders such as vitiligo, cutaneous T cell lymphoma, and psoriasis.

SAD is also known as seasonal depression which is brought on by changes in the season, usually starting in the fall and lasting throughout winter. Heliotherapy helps reduce the debilitating and depressive behaviours of SAD, such as excessive sleepiness and fatigue. In SAD treatment with heliotherapy, a lightbox, which is a specially designed box that emits soft light at a standard wavelength, is used. The results usually last for at least a month and this treatment is preferred over antidepressants in the treatment of SAD since it’s relatively safe and easy.

Heliotherapy has also been suggested as a treatment for non-seasonal depression and other psychiatric mood disturbances such as major depressive disorder, bipolar disorder, and postpartum depression.

Some types of cancer and precancers are treated using photodynamic therapy—a special kind of heliotherapy. A special drug called a photosensitizer is used during the procedure and applied topically to the body. The photosensitizers produce a kind of active oxygen that kills nearby cells when exposed to specific light wavelengths.

Heliotherapy has been used for a long time to treat conditions such as hyperbilirubinemia and jaundice, which is the yellowing of a baby’s skin, eyes, and body tissues due to excess bilirubin. Accumulation of excess bilirubin can result in central nervous system damage, so treatment to reduce the baby’s bilirubin levels is necessary. Bilirubin absorbs light and the absorption of light causes the breakdown of bilirubin into substances that the baby’s system can process and excrete.

In the treatment of CRPS, heliotherapy helps to relieve pain and promote healing especially when used with other treatments such as Neridronate. Heliotherapy reduces inflammation and pain transmission, relaxes nerves and muscles, increases microcirculation, and accelerates healing and cell regeneration.

A heliotherapy salt bath is effective in improving physical health by regulating blood sugar, maintaining bone strength, promoting proper functioning of brain cells, preventing muscle spasms and veins viruses. This heliotherapy salt therapy is a combination of the traditional sunbathing characteristic of heliotherapy and the benefits of minerals such as magnesium and sulfate to rejuvenate the body and act as a source of energy, boost immunity, and stabilize moods. The combination of salt and light is thought to be helpful in treatment of skin diseases, arthritis and many more health issues.

The combination of heliotherapy and salt baths require the supervision of a doctor to ensure that it is done properly in order to prevent any adverse effects. The salts break down in water and are absorbed into the body through the skin. Salt baths are used as treatments for arthritis pain and swelling, psoriasis, bruises, sprains, fibromyalgia, sunburn pain, swollen feet, soreness from chemotherapy, insomnia, and ingrown toenails.

The higher and longer the exposure to artificial ultraviolet light, the higher the risk of developing skin cancer, especially if the skin of the person undergoing treatment is very fair.

Frequent treatments can lead to the suppression of the immune system, leaving the body open to diseases, infections, and skin cancers.

Treatments increase sensitivity of the eyes to light. If eyes aren’t properly protected after treatment, eye damage can result from exposure to sunlight or other bright lights and even the development of cataracts.

Exposure to the sun or artificial light during treatments even for a short period of time can cause tension-type headaches or migraines, especially in people who are sensitive to light.

Progressive damage to the skin may result from exposure to ultraviolet light, even in small doses. Ultraviolet light is also known to be a factor in the formation of cataracts and is strongly linked to incidence of skin cancer. Modified treatments which remove ultraviolet light are recommended to counteract this risk.

At a high enough intensity, optical radiation can damage the eyes and skin causing conditions such as photoconjunctivitis and photokeratitis. Heliotherapy is a mood altering treatment with the possibility of triggering a manic state from a depressive state, causing anxiety and other side effects if not carried out properly. Therefore it is recommended that patients undertake the treatment under the supervision of an experienced clinician.