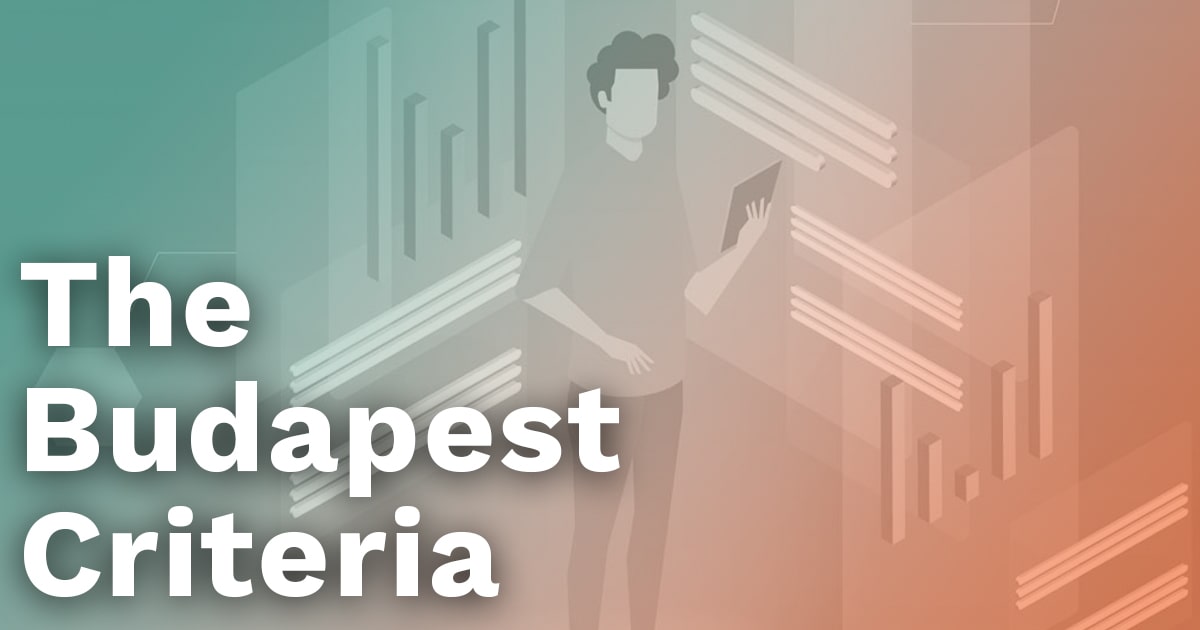 The Budapest Criteria is a diagnostic guideline that is the best available method, so far, for the diagnosis of CRPS—a chronic condition characterized by continuous, severe pain. CRPS, or Complex Regional Pain Syndrome in full, is actually quite difficult to understand due to the limited knowledge of the disorder. To date, there are no specific medical tests that can be used to conclusively diagnose CRPS. Some tests such as X-rays, MRIs, Bone Scans, and Thermography tests help to identify some of the symptoms common in CRPS cases and are also fundamental in eliminating other medical conditions with similar signs and symptoms as CRPS. Due to these complexities, it became necessary to find a better way to determine whether a patient had CRPS or not; and thus the Budapest diagnostic Criteria for CRPS was created.

The Budapest Criteria is actually a revision of an earlier guideline created in 1994 by a group of pain medicine experts brought together by the International Association for the Study of Pain (IASP).  This 1994 IASP diagnostic criteria prompted the renaming of Reflex Sympathetic Dystrophy (RSD) and Causalgia to Complex Regional Pain Syndrome (CRPS) Type 1 and Type 2; respectively. The differentiation between the two types of CRPS is based on the cause of each and not so much on clinical presentation or pathophysiology differences in either one.

The original 1994 IASP diagnostic criteria for CRPS was created out of necessity in order to improve clinical recognition of the disorder. After some evaluation, the 1994 IASP criteria was found to be extremely sensitive when it came to the diagnosis of CRPS. This meant that, through the use of this criteria, the possibility of missing a true case of CRPS in a patient being examined was rare. However, it also meant that the criteria led to over-diagnosis of CRPS, such that non-CRPS cases were positively diagnosed as CRPS. This led to inappropriate or unnecessary treatments.

The problem of inadequate specificity was mostly a result of the dependency of the criteria on self-reported symptoms and the lenient decision rules, such as only requiring the presence of oedema and severe pain to make a positive diagnosis of CRPS. The issue of pain is a problem because there’s no way to measure the pain or determine that it really is “disproportionate” to the inciting injury or event as is the case with CRPS patients.  The IASP criteria did not incorporate motor and trophic features either, which are vital to diagnosing CRPS and this negatively impacted the accuracy of CRPS diagnoses made using this guideline. The problem of over-diagnosis led to the modification of the 1994 IASP criteria into what we now know as the Budapest Criteria for diagnosing CRPS.

The modified guideline was created in 2003 at a closed workshop held in Budapest, Hungary—hence the name Budapest Criteria. It ensured better diagnostic accuracy for CRPS cases by correctly differentiating between CRPS and non-CRPS neuropathic pain. As a result of the introduction of the Budapest Criteria, some previous CRPS diagnoses associated with the former IASP criteria were deemed to be false positives and the patients were considered to be without a diagnosis. To cater for such patients, a third diagnostic subtype referred to as Complex Regional Pain Syndrome Not Otherwise Specified (CRPS-NOS) was recommended.

How Does The Budapest Criteria Work?

The Budapest Criteria provides a clinical diagnosis for CRPS. The guideline is basically a checklist which consists of the common signs and symptoms of CRPS. An examiner checks a patient for said signs and symptoms in order to be able to determine whether a CRPS diagnosis applies to them. Signs are visible effects of a medical condition that an examiner is able to observe on a patient. Symptoms on the other hand are effects only noticed and experienced by the patient.

The basic outline of the Budapest clinical diagnostic criteria for CRPS consists of 4 symptom categories and 4 sign categories which are based on the changes associated with the development of CRPS in the body. These changes are sensory, vasomotor, sudomotor, and motor/trophic changes. A brief explanation of each is given below:

The changes considered under this category all relate to changes in sensitivity to pain in the patient. All individuals affected by the CRPS medical condition suffer from hyperalgesia which is an increased sensitivity to pain. With hyperalgesia, the affected individual feels extreme pain stemming from an exaggerated reaction to a stimulus which is normally painful. This means an injury that would normally be only slightly painful to most people will feel absolutely unbearable for a CRPS patient. Hyperalgesia is thought to be a result of changes to nerve pathways which result in the overactive response to pain.

Some CRPS patients also suffer from severe allodynia which is when an individual feels pain from stimuli that’s normally non-painful to most people, such as a light touch or even exposure to a breeze or running water. CRPS patients usually have a connection between emotional reactions and pain such that their pain is often aggravated by changes in their emotions. Such instances of intense pain that CRPS patients experience from time to time are referred to as flare ups. The intensity and duration of flare ups varies for each patient, but basically their hypersensitivity rises to such a level that they may feel pain from anything, including loud noises or brushing the affected limb against any surface.

Vasomotor disturbances refer to changes to blood vessels which alter their diameter and these relate to the natural processes of vasodilation and vasoconstriction. Vasodilation is simply defined as the widening of blood vessels. It often occurs naturally in the body in response to triggers such as an increase in temperature, decrease in nutrients, and lowering of oxygen levels. In the event of such triggers, the blood vessels widen or dilate, which in turn increases blood flow and lowers blood pressure to address the problems associated with the triggers.

Conversely, vasoconstriction is the opposite of vasodilation, where the blood vessels narrow in size in response to triggers such as decreased temperature. The constriction of blood vessels restricts blood flow which is helpful in the event of an injury as it helps prevent haemorrhage and acute blood loss, plus it also helps with retaining body heat. In patients with CRPS, vasomotor functions don’t function properly and these disturbances are characterized by changes in skin temperature and color.

The most notable sudomotor change in CRPS patients is increased sweating even in the absence of exertion or intense physical activity. The increased sweating is a result of the stimulation of sweat glands which is caused by central changes reflected in changes of activity in sudomotor neurons.

As the name suggests, these refer to movement. CRPS patients will often be constantly in pain. The severity of this pain usually increases whenever they try to move the affected limb. Eventually, the patient opts to avoid moving the painful limb. As a result of the disuse or misuse, the limb may become useless and weak and show coordination deficits. Advancement of CRPS show changes in the skin, hair, and nails, mostly due to a loss of minerals from the bone.

According to literature such as the 2018 Complex Regional Pain Syndrome in Adults UK Guidelines for Diagnosis, Referral and Management in Primary and Secondary Care, these categories are stated as follows:

Using this guideline, for a CRPS diagnosis to be made, the following conditions must apply:

Pain is the most prominent symptom of CRPS which is why it is included as one of the features of the Budapest Criteria for CRPS diagnosis. As mentioned before, pain is an unmeasurable factor so an examiner would have to rely on the patient’s description of what they are feeling to determine whether it is associated with CRPS. The McGill Pain Index helps with this challenge as it allows a somewhat reliable method of quantifying pain. The identification of other signs and symptoms in addition to pain also helps with the CRPS diagnosis.

Is The Budapest Criteria For CRPS Reliable?

Challenges of Using the Budapest Criteria for Diagnosing CRPS

Although the Budapest Criteria is easy to use, it comes with some challenges. These challenges stem from the difficulties faced in understanding the CRPS medical condition itself. Nevertheless, it is by far the best available tool for CRPS diagnosis. Any limitations to the criteria can be made up for through the use of medical tests that can help to identify certain CRPS signs and symptoms, and eliminate other possible medical conditions.

Sometimes the efficacy of the Budapest Criteria can depend on the inciting event that leads to the development of CRPS. One of the causes identified for CRPS is strokes. Post Stroke Complex Regional Pain Syndrome (PS-CRPS) is a sadly, common complication. However, there isn’t a lot of literature available for the use of the Budapest Criteria for PS-CRPS diagnosis. A study in The Clinical Journal of Pain with regards to the implementation of the guideline for this type of the medical condition showed that the diagnostic validity of the Budapest clinical diagnostic criteria for PS-CRPS is low and may require adjustments to be made to the checklist.