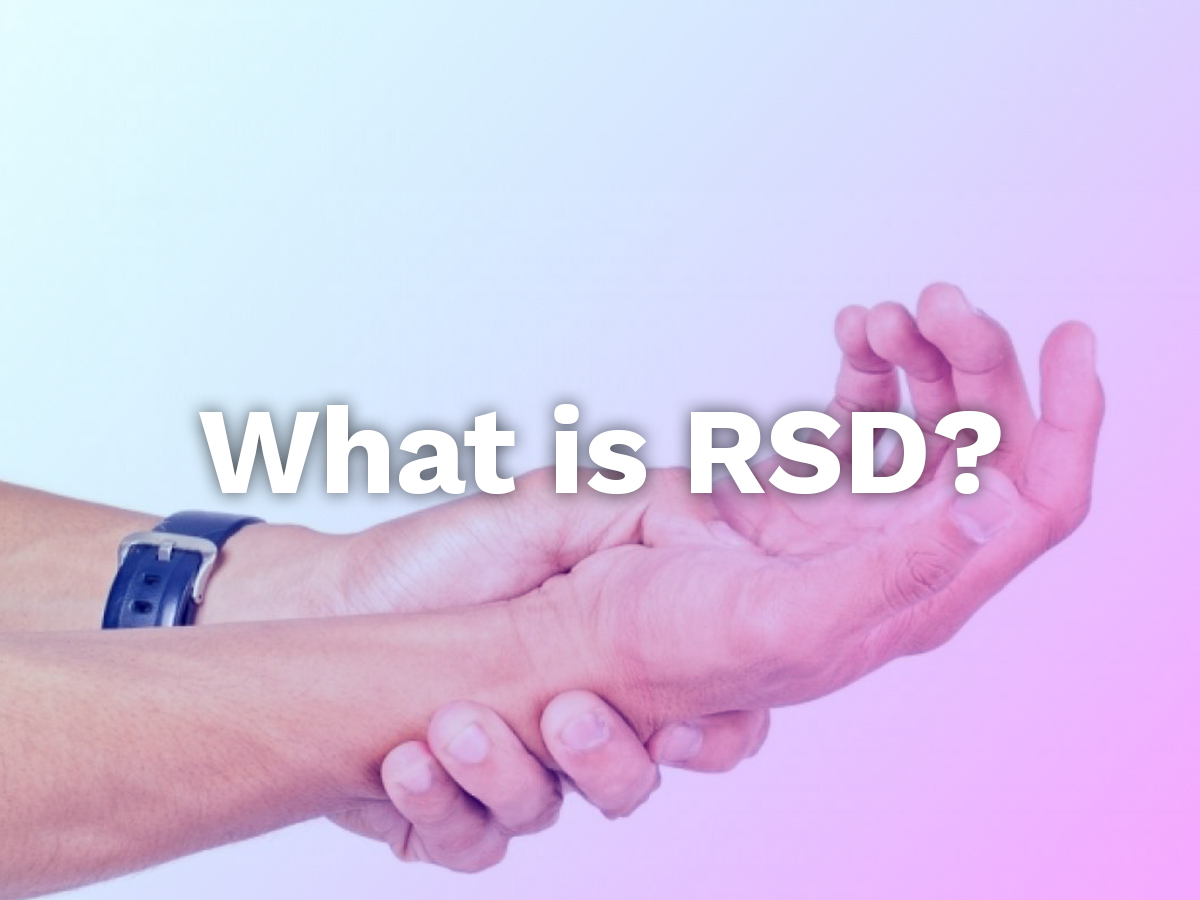 RSD stands for Reflex Sympathetic Dystrophy; a medical condition where the affected individual experiences intense pain in a limb, loss of function of that limb, along with changes in skin colour and temperature. The name RSD was actually used until sometime in the mid-1990s when it was changed to Complex Regional Pain Syndrome (CRPS) Type 1. This change was accompanied by the distinction between two different types of the CRPS medical condition. The second form is referred to as Complex Regional Pain Syndrome (CRPS) Type 2. The key difference between what is RSD disease and the other known form of the medical condition is that RSD is caused by a variety of injuries and medical emergencies, while CRPS Type 2 is believed to result from significant damage to the peripheral nerves.

So exactly what is RSD? Breaking down the name of this medical condition can help in understanding the diseases itself. “Reflex” is usually defined as an action performed without conscious thought as a response to a particular stimulus. Most, if not all, of the human body functions are reflex. For example breathing and blinking. With regards to RSD, the use of the word reflex highlights most of the defining characteristics of the medical condition that occur as a response to a stimulus; for example hyperalgesia and allodynia which are heightened responses to painful and non-painful stimulus, respectively.

The word “dystrophy” is defined as a disorder whereby an organ or tissue of the body wastes away. With RSD, the patient’s affected limb undergoes several changes that contribute to the loss of function of that limb. Due to underuse, the limb begins to waste away or atrophy; hence the use of the word “dystrophy” in the name. Combining all three terms to form the medical abbreviation RSD highlights that this medical condition is characterized by a response to stimulus from an abnormally functioning sympathetic nervous system leading to the atrophy of the affected limb.

The discovery of RSD goes way back to the time of the America Civil War of 1861 to 1865. Silas Weir Mitchell MD who was a young U.S. Army contract physician at the time of the war was the first to document the first descriptions of CRPS. While treating soldiers with gunshot wounds, he observed that some of them experienced pain that lasted even after the removal of the bullets from the bodies of the wounded soldiers. Based on the reports of the soldiers he treated, he described the pain as burning in nature in his book titled Gunshots Wounds and Other Injuries. Thereafter, he named the pain “Causalgia” which is the Greek word for “burning pain” and is the original term for what is now called Chronic Regional Pain Syndrome (CRPS) Type 2. Silas along with other physicians continued to study Causalgia and document their findings such as the other symptoms associated with the medical condition.

In 1900, a surgeon from Hamburg named Sudeck discovered that atrophy and bone rarefaction developed secondary to nerve damage. His findings were later confirmed by a German doctor named Keinbock. Sudeck was the one to suggest that RSD was a result of an exaggerated inflammatory response after injury or operation of an extremity. As more information about this medical condition of chronic pain was discovered, several names came up for the disease. Besides “Causalgia” coined by Mitchell and used when the disease begins as a result of nerve injury; other terms included Algodystrophie primarily used in France, Algoneurodystrophy, Minor Traumatic Dystrophy, Peripheral Trophoneurosis and so many more. Later in 1995, RSD was given a new name which was Complex Regional Pain Syndrome, later specified to Complex Regional Pain Syndrome (CRPS) Type 1.

RSD is more common among women between the ages of 25 to 55 years, but anyone can get it. In medical terms, RSD is best known by what are known as ICD-10 codes. The codes are part of a list of medical classifications created by the World Health Organization (WHO) called the International Statistical Classification of Diseases and Related Health Problems (ICD). A code is designated for each diagnosis and the same code is used by doctors, health insurance companies, and public health agencies all around the world. Using this code, these individuals are able to identify the diagnosed disease, and even which specific body part is affected. This is particularly helpful for RSD as the code will identify the affected limb so that whoever reads and interprets it will know exactly where to concentrate their treatment efforts.

The RSD ICD-10 codes are given as follows.

The code G90.50 for RSD is not recommended for use when making an RSD diagnosis since there are more useful codes with greater level of detail.

RSD is a medical condition of variable course and inexact cause. Unlike CRPS Type 2 which develops after significant nerve damage, there are several causes that can lead to the onset of RSD. Some of the most common causes include:

Examples of these are falls, sprains, breaks, and fractures especially in the wrist and ankle.

These include injuries such as knife and bullet wounds.

On account of the difficulties in understanding the RSD medical condition, the pathophysiology of the disease is unclear. Hence the mechanism by which it develops and progresses in the body are left to much speculation. Some theories suggest that RSD develops because of the irritation and abnormal excitation of nervous tissue and consequently the abnormal impulses along nerves that affect the blood vessels and skin. The nervous system, peripheral nerves, and brain are also affected and those effects alter the perception of pain. The duration of RSD varies on a case by case basis. For mild cases, it might last for a few weeks, followed by remission while in other cases the pain continues for years. In the worst case, RSD may last indefinitely.

The clinical features that are used to identify and diagnose RSD are as follows:

The sensation of pain associated with RSD is described as deep, aching and usually disproportionate to the cause of the pain; whether it’s an injury or other stimulus. The pain is constant and experienced on a daily basis. In some cases, the patient’s sensitivity to pain can be so high that any stimulation of the skin on the affected part can be considered painful, even when it’s normally not. This phenomenon is called allodynia and examples of normally non-painful stimulation that can cause pain in RSD patients include wearing clothing, a light breeze, and brushing hair. Sometimes the patient may experience what’s known as hyperpathia. This is defined as a prolonged after-sensation of pain and may occur after repetitive stimulation such as tapping the skin stops. Other painful sensations that RSD patients can experience include spontaneous sharp jabs in the affected region that don’t really have a clear point of origin.

As RSD advances, the skin of the affected area goes through some changes as a result. In appearance, it might seem shiny or dry and scaly. Along with changes in the skin, the affected individual’s hair and nails will have abnormal growth patterns. The hair might grow coarse then thin, while the nails may become brittle and initially grow faster before growing slower. In the most extreme cases of RSD, the patient may get recurring infections of their skin, to the point that amputation may be required to remove the infected extremity. Vasomotor disturbances also affect the skin by disrupting the vasodilation and vasoconstriction processes in the body. This results in skin temperature changes, causing the skin to feel cold or warm to the touch. The skin of the affected area may also show abnormal sweating patterns or chilling. Other skin changes include changes in colour of the skin which can be triggered by changes in the room temperature or simply occur on their own.

Swelling usually occurs due to fluid retention in the affected area and is localized to the affected area. The area is usually tender and painful and may look shiny in appearance. The swelling may go down with time and in some patients, it may not be present at all.

Whenever the patient moves the affected limb, they experience severe pain. As a result of this pain and the difficulties in moving it, they might stop using the limb altogether. In addition, there is some belief that there is a direct inhibitory effect of RSD on muscle contraction that causes difficulty in initiating movement, making the joints feel stiff. Due to disuse of the affected limb and decreased mobilization, the muscles in the limb may start to waste away—a phenomenon called disuse atrophy. Other effects include tremors and involuntary severe jerking of extremities. The patient’s emotional state can worsen these symptoms and there may also be sudden development of severe, disabling muscle cramps.

Wasting of the bone (or bone loss) occurs in advanced stages of the RSD medical condition. This bone loss can be seen through X-rays or bone scans which help with making an RSD diagnosis.

With time, these RSD symptoms may spread from the affected area to other parts of the body. The symptoms might spread upward from the initial site, or follow a “mirror-image” course and spread to the opposite limb, or the spread might be completely independent, occurring in a separate, distant region of the body.

Effective treatment of RSD involves the use of a variety of drugs, physical therapy, mental exercises, and even psychotherapy. Each of these treatments targets a specific aspect of the medical condition. For example, most of the medications such as opioids, anticonvulsants, corticosteroids, and bisphosphonates are used to control the pain. The most effective drug so far is Neridronate which has actually been seen to provide remission in some patients, especially those with RSD.

The physical activities part of the treatments address the issue of decreased mobility of the affected limb. By encouraging the patient to keep the limb moving, the physical exercises help them learn to use the limb again and get an increased tolerance to pain. Psychotherapy is necessary to help the patient cope with the emotional stress of living with a chronic condition. The daily pain and increasing dependency on others to get through the day may make the patient feel depressed, stressed, and anxious. Such negative emotions cause flare ups of the RSD symptoms, resulting in excruciating pain that may last for some hours or days.